By the name “Kyriakos” (a synonym of our Lord Jesus Christ’s extensive name, in Greek “Kyrios” = Lord), the Orthodox hagiology of our church refers to the following saints: A Patriarch of Constantinople, A Patriarch of Jerusalem, A Bishop, A Holy Martyr, 6 Martyrs and 2 “Osioi” (plural, meaning Holy Men / Women, Saints). These “Osioi” are Saint Kyriakos the anchorite, whose memory is celebrated on the 29 th of September and is the Patron Saint of the Kampos Community (in Tsakistra), and the other is “Osios” Kyriakos of Evrychou, whose memory is celebrated on the 24 th of May.

This miracle-maker Saint is not mentioned by the Cypriot annalists and hagiographers; however history, Tradition and his ancient Church -a little bit outside Evrychou -testify for his holy life. During the end of the third and the beginning of the fourth century, Monasticism and the departure to the deserts of Palestine and Egypt started to flourish. This spirit of total devotion to Christ was predominant with many Christians. Among them was Saint Kyriakos of Evrychou, who was born of Christian parents and learned about Christ since childhood. However, he had loved Christ -as He is cited by the church’s Service -since babyhood. His anchorite’s residence, where his Tomb and Church are found today, became a centre of missionary work for the surrounding region and of spiritual nourishment for those who took refuge there where the Saint lived his ascetic life. His holy life, his contribution, and the miracles that he performed, which God’s Grace granted him through his prayers to Christ, contributed so that he was recognised as a Saint in the conscience of the people that knew him. This awareness among the congregation of Christians is preserved undying until today. His beautiful Church, today a cemetery, the great gathering of the faithful on the saint’s day (24 th of May), and also the miracles that still occur today through his Grace, are the affirmation that “Osios Kyriakos” lived right there where his Church is and that for 1700 years now his prayers to the Source of Strength, our Lord Jesus Christ, are referred back for those who invoke him with faith. Only two years ago he sent a vision to a brain-tumour patient in Larnaca, who came to the Church and was healed.

When visiting his Church -and anywhere else we honour his memory or even in our personal prayers -let us also invoke him through his “Apolytikio” (Recessional Hymn):

(Loosely translated, it calls the saint a “citizen of the desert and an angel in body”, saying how he was able to perform miracles and cure people through fasting, vigil, and prayer, and glorifies his Powers and his Miracles) 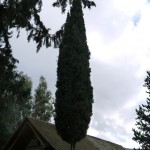 The church of St. Kyriakos, an intact specimen of a mediaeval catacomb.

At a small distance from the north part of Evrychou there is a church. This church is an intact specimen of a mediaeval catacomb (undercroft). The church belongs to a local saint, St. Kyriakos.

It is also remarkable from an architectural point of view, dating back to the 15 th century. It is a Basilica with a wooden roof, having a special protrusion in the north wall where the Saint’s Tomb is located.

The entire church consists of a narthex, the main temple and the chancel.

There is a chapel in the north side that includes the Saint’s tomb. The entire church was painted later on. However, it was afterwards -exactly when it is not known -coated with lime (whitewashed) and so the saints’ figures disappeared. At the same time, very few frescoes are extant today around the arch through which the main church contacts the small chapel where the saint’s tomb is. The icon screen is of excellent artistry from the 16 th century. Inside there is a 17 th century icon of Christ.

In the apse there is a salvaged renowned -though in bad condition -16 th century icon of the Virgin Mary taken from the scene of the “Evanggelismos” (Annunciation). On the left, between the arch and the north gate, the icon of St. Demetrios is extant.

The icon of St. Kyriakos is not mentioned anywhere. The reliquary of St. Kyriakos of Evrychou is found in the “Agia Marina” church in Evrychou. It is not known when the removal of his relics took place.