The Cyprus road network is almost inexistent. There were Streets – carriage way – in order to connect the cities and few villages, particular in the regions that served the occupied Authorities. Outside these regions there are the paths, where all the work of – transport of goods but persons too, were done with donkeys and carts. Kkiratzides and Amaxarides.

For the confrontation of the increasing demands in the distribution of goods, but also of people the improvement of the road network, was necessary. The creation of new streets for wheeled vehicles mechanically-driven, as the manufacture of a railway, in order to connect a harbour with basic rural regions, but also the mines of Skouriotissas and Hromiou, were more than necessary work to be done.

Thus on 21st October 1905, the openings took place, in Famagusta, the first line up to Nicosia and in 1907 until Morfou, in order to reach the final station in Skouriotissa and the Evryhou, in 1915. There that the ruins of a stone -built building is saved, it was the last station of the Cypriot railway. It was built in 1906.

In this region various manors, had been built, for the good service of the railway operation. Offices, passengers room, engine-room, storehouses and a hostel “Hotel”, for the overnight stay of the passengers and sightseers.

The existence of such work in this region, apart from the facilitations in the distribution of goods and persons, was also a mean for employment – being a worker – something that also contributed in the development of the village very much.

Progressively various professions and small industries began to be developed. 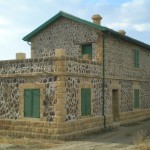 There was the police station, the cadastre, the court here. The Greek school was founded here. Livelihood and travel 24-hours a day.

The fact that there was a school in Evrychou ,made the residents of the region to be more energetic and morale , thus in October 1931 when a revolt against English occupation burst out in Cyprus , the village played its own role.

The operation of the railway was terminated in 31.12.1931.It was considered to be a punishment, for the villagers’ behaviour against the English, despite the justification for unprofitable work.

The train stopped functioning. It stopped to serve the region. The memory however, remain live, the history records and we help it to record and keeps the memories live, in order to last in the deterioration of time.

From here the responsibility originates, our duty, to try to change this ruin, not to let it be as it is today, that once was a historical event, the station of Cyprus railway.

For history we report that this building was used in 1932 as a sanitary centre, because of the locality, for the confrontation of contagious illness. Later it was used as a dormitory of forest services and it was destroyed in 1957.

After some efforts of the Community Authorities but also after many publications, the authorisation of £ 24.000 was announced–in September 2003, for the restoration of this building.

Up to today, May 2004, nothing has been done, and this should make us worry to do something and to constantly demand the exploitation of the place and its history.

The placement of a wooden sign, Antiquities Department, is not enough. The street that leads to this building has to be paved soon, even with village expenses.